This Gemmological Brief describes a 1. 75 ct pink sapphire, which was submitted to the Gem and Jewelry Institute of Thailand’s Gem Testing Laboratory.

The examined sample consisted of a doublet formed of two distinctly different pieces: pink sapphire for the crown and near-colourless sapphire for the pavilion. These two pieces were joined together along a contact layer located slightly below the stone’s girdle. 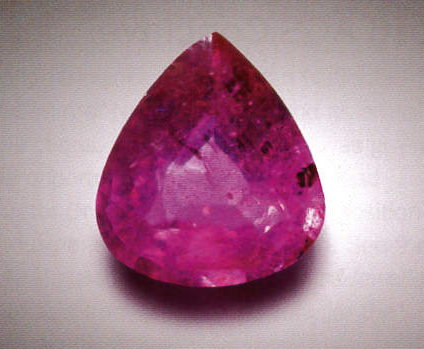 This 1. 75 ct pear-shaped stone proved to consist of a sapphire doublet containing fissures and cavities filled with lead glass. Photo by S. Saengbuangamlam.

Microscopy at high magnificat ion showed that the contact layer was filled with glassy material that locally contained randomly oriented fragments of corundum. Inclusions consisted of minute particulates and planar ‘fingerprints’, suggesting that the corundum pieces were of natural origin. Further examination revealed a blue flash effect associated with filled fractures/fissures, which were seen in both the pink and near–colourless portions. Several trapped gas bubbles in the filled fissures completed the story. These features are typical of lead-glass-filled corundum.

When exposed to the DiamondView’s deep-UV excitation, the glassy material was inert and appeared as dark areas along the contact layer and in fissures and cavities, in contrast to the strong red fluorescence of the host corundum.

The X-ray image of the stone revealed that the contact layer consisted of a high–density, dark-appearing material. This material was also present along many fractures inside the host corundum and in cavities on the stone’s surface. FTIR transmission spectra compared the tested corundum doublet with a lead–glass-filled ruby reference sample. Both spectra displayed similar broad bands at approximately 3500, 2597 and 2256 cm¹ that are commonly seen in lead–glass-filled materials.

EDXRF spectroscopy of the crown and pavilion showed expected traces of Ti, V, Cr, Fe and Ga. The additional presence of significant amounts of Pb and Si in both portions of the stone confirmed that it was lead–glass-filled.

The DiamondView images (below) of the 1.75 ct lead-glass-filled corundum doublet show the sample in reflected light from the sample chamber illuminat or (a), and exposed to ultra-short -wave UV radiation (b and c). The glass filler has a low lustre in reflected light, and is inert to UV radiation – in contrast to the strong red fluorescence of the host corundum . Note also the presence of some angular fragments of corundum in the glassy material along the contact layer between the crown and pavilion (particularly in image c).
Photos by S. Promwongnan.