Belonging to the beryl family

The third stone in this series on the more well-known (and sometimes lesser known) gemstones covers emerald. In the same way as ruby and sapphire were members of the same family, so emerald is a member of a larger family of gemstones, this being the beryl family. Other members include aquamarine, and lesser known varieties such as heliodor and Goshenite. As with sapphire and ruby, the colour can be the distinguishing factor between types. Emerald is (commercially speaking) the green variety of beryl, and can be coloured by either chromium or vanadium. Most people think of emerald as being an almost grass green, but in truth it can be virtually any shade of green, some being a really deep, vivid green, while others can be so pale as to be almost mistaken for aquamarine. Technically, once the saturation falls below a certain level, the stone becomes a simple ‘green beryl’, although chemically it can be identical. In it’s natural form, emerald grows as elongated hexagonal crystals, up to several thousand carats in weight. One of the largest ever found is the Devonshire Emerald, in the Natural History Museum, which weighs 1383.93 carats, and was thought to be part of an originally larger crystal. Unfortunately though, the name derives only from the fact that it was owned by the Duke of Devonshire, in 1931, there are no emerald deposits in the UK. To find truly outstanding and quality stones, you have to travel, with sources like Zambia, Zimbabwe, India and even Siberia yielding stones. The best though are thought to come from Colombia, from mines such as Muzo and Chivor, and these can show the deep green that most people associate with emeralds. 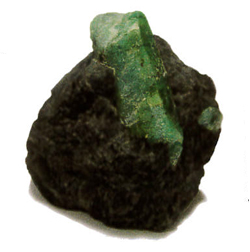 Emerald is probably the one gemstone that stands out above all others as being accepted despite its imperfections. Totally clean emeralds are few and far between, and the vast majority show a range of inclusions, which have come to be known as the ‘jardin’ of the stone, from the French for ‘garden’ because they can resemble foliage. These are natural features found in the rough crystals, and which can make the stone difficult to cut. and prone to breakage in certain directions. Due to this, a specific style of cut was developed, that offered protection to the stone, and allowed it to take its place amongst the ‘big 4′ gemstones. We have come to know this style as the ’emerald-cut’, a term which nowadays can be applied to any stone cut in a retangular form, with the corners truncated, but which was originally used to prevent these corners chipping or breaking during setting. On the plus side though, this range of inclusions and internal features can be used by trained gemmologists and laboratories to help narrow down the original locality from which the emerald came. Certain features, such as an enclosed cavity within the stone, that contains a liquid, a solid crystal, and a gas bubble, can be indicative of a Colombian emerald, while other features can point to other localities, such as Zimbabwe and Zambia.

How to identify an emerald – well, in 1934 Gem-A, working with Chelsea Polytechnic, developed a filter that would differentiate an emerald from its many simulants of the day, and this was named the Chelsea Colour Filter·. Today, with advances in methods of synthesis and lab growth, the filter isn’t possibly as useful as it used to be, but it is still a very valid gemmological tool. Other results of gemmological tests show that emerald has a hardness of 7.5, and a refractive index of 1.57 to l.60, and also a spectrum that can be seen with a handheld spectroscope. Care should be taken not only when testing emeralds, but also when cleaning and repairing any jewellery set with them. Almost all emeralds are routinely oiled, a fact that is well known to most. The oil helps disguise any surface reaching fractures, making them less visible. This isn’t anything new, or anything to worry about, it’s been ongoing for centuries, but it’s not advisable to put an emerald into an ultrasonic or steam cleaner. or expose it to heat during repair, as the oil can be drawn out.

Emerald’s place in myth and folklore

Legend has it that emerald could cure some diseases, and even had the power to reveal the future, if placed under the tongue (not to be recommended!). It’s also thought that it can calm
and soothe sore/tired eyes, simply by looking at it. Other sources have it as being able to strengthen the memory, and even protect from giddiness, which could be useful in both respects for late nights down the pub! From the desirability side, though, it serves as the birthstone for May (possibly representing the new growth of spring), and is the gemstone associated with both the 20th and 35th wedding anniversaries. And finally … did you know that the cause of the green colour in emerald is chromium – the same element that causes red in ruby! Isn’t nature wonderful! 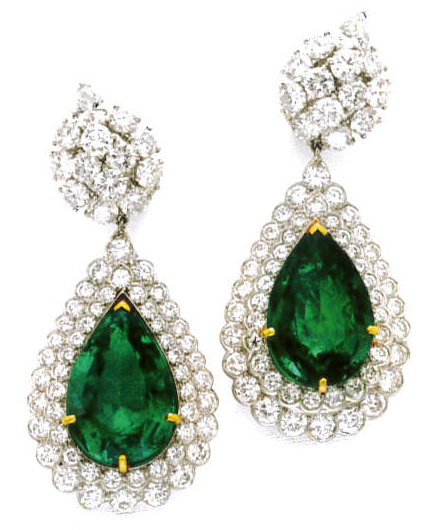